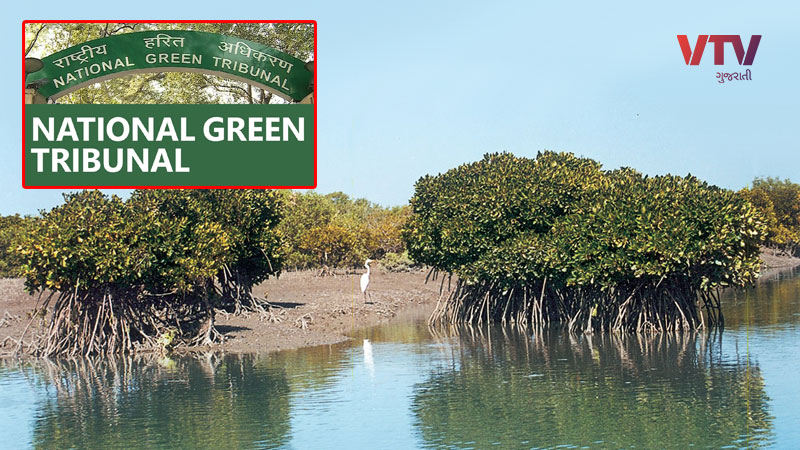 The National Green Tribunal Thursday directed the Environment Ministry and the Gujarat government to recover fine from violators responsible for destruction of mangroves in Kutch district.

A bench headed by NGT Chairperson Justice A K Goel noted that destruction of mangroves took place but violators were not identified though the liability was of the Deen Dayal Port Trust.

The amount to be recovered has also been quantified along with the area where damage took place, it noted.

“Let further steps be taken for enforcement of order of this tribunal dated September 11, 2019. The amount determined be recovered expeditiously and restoration work be executed which may be overseen by a joint Committee comprising Forest Department and Gujarat Coastal Zone Management Authority,” the bench said.

Forest Department will be the nodal agency for compliance, the NGT said while directing the joint Committee to ensure compliance of directions, including stopping and remedying violation of Coastal Regulation Zone Notification, including any salt manufacturing activity and Forest Conservation Act, 1980.

“The joint Committee may file a compliance report with the Chief Secretary, Gujarat within three months,” the bench said.

The NGT had earlier sought response from Centre and others on the allegation that Deen Dayal Port Trust in Gujarat's Kutch district was not executing the directions issued by it to protect the mangroves in its vicinity from destruction.

The tribunal was hearing a plea filed by Gujarat based Kachch Camel Breeders Association seeking execution of September 11, 2019 order of the NGT.

"It has been submitted before us that none of the direction given in our judgment dated September 11, 2019 has been followed. Issue notices to the respondents by registered post/acknowledgement," the bench had said.

The petitioner association had alleged rampant clearing of the mangroves in Nani Chirai and Moti Chirai areas of Bhachau Taluka in Kutch district by the Deen Dayal Port Trust.

The destruction of mangroves not only violates the Forest Conservation Act, 1980 and Coastal Regulatory Zone Notification, 2011, but also deprives the indigenous Kharai camel species of its major food source, thereby affecting the livelihoods of several hundred camel breeders of the region," the petition had said.

The petition, filed through advocate Sanjay Upadhyay, claimed that the "incessant destruction activities" of the respondents have diminished the cover of sparse mangroves found at the site and destroyed the habitat of the indigenous Kharai camels which has affected the livelihood of villagers dependent on the mangroves.

It said these activities carried out by the Deen Dayal Trust Port were without any CRZ or Forest clearance which was causing irreversible loss of mangroves.

The association had sought directions for the rehabilitation and restitution of the mangroves already destroyed and payment of a environmental compensation charge for the destruction.

Water creeks should be flowed free as directed by NGT

The NGT had last year directed that there shall be no obstruction of any kind in the creeks (a stream or minor tributary of a river) and free and continuous flow of estuarine water in the creeks will be ensured.

The tribunal had ordered that Forest Department, Gujarat Coastal Zone Management Authority and revenue officials to jointly inspect the area to find out the persons who were responsible for obstruction of the creeks.

"If there has been any activity in the mangroves area which are in contravention of the Forest (Conservation) Act, 1980 or any other law, the Forest Department will immediately take action in accordance with law," the NGT had said.