Animals / Rise in Temperature Draws Out Snakes in Vadodara 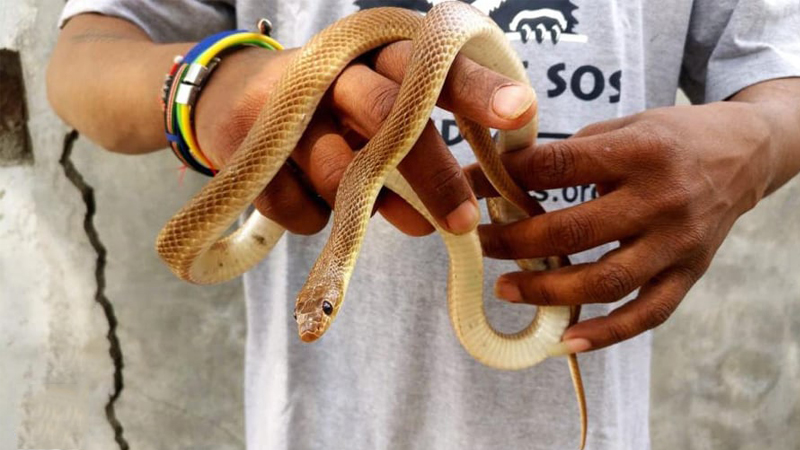 Multiple sightings of snakes in Vadodara have been keeping the Wildlife SOS-GSPCA rapid response unit on its toes. In the past month alone, the team has responded to over 30 reptile rescue calls!

The rising temperature has forced reptiles and other wild animals to venture out of their natural habitat in search of cooler places to seek respite from the excessive heat. These sightings have kept the Wildlife SOS-GSPCA team quite busy in Vadodara.

Last week, the team received a call on their emergency helpline about a 4-foot-long rat snake sighting at Om Party Plot located in Vadsar, Manjalpur road. The snake was found coiled up inside an electrical junction box.

Raj Bhavsar, who leads the Wildlife SOS-GSPCA rescue team in Vadodara, arrived to the location with necessary rescue equipment and a transportation unit. He carefully extricated the snake and transferred it to a transport carrier.

They rescued another rat snake which was nestled behind the LPG cylinder in the backyard of a house. The snake carefully extricated with the help of a snake hook.

Banded racer snake found in a house in Tandalja

In another incident, a family living in an apartment in Shree Hari Residency located on Sun Pharma Road, Tandalja, called the Wildlife SOS rescue hotline after finding a Banded racer snake in their house!

The Banded racer is a non-venomous species, found in plains throughout most parts of India. When threatened or provoked, they mimic the cobra’s defense mechanism of displaying a narrow hood and coils the upper body loosely. This often leads to misidentification, resulting in conflict.

"Snakes take shelter in buildings to get rid of heat"

Kartick Satyanarayan, Co-founder & CEO of Wildlife SOS said, “Snakes making their way into buildings and residences to seek reprieve from the heat is a common occurrence during the summer months. Since they are ectothermic, their body temperature varies with that of the environment. Therefore, they are unable to self-regulate their temperature if they get too warm.”

Raj Bhavsar, Wildlife SOS Project Coordinator said, “We are happy to see that more and more people are choosing to make a conscious decision of calling
Wildlife SOS in such situations instead of taking matters into their own hands. Our Hotline is run with the objective of helping wildlife in distress as well as to assist the public and to sensitize them to the presence of urban wildlife and reptiles.”

Since 2010, Wildlife SOS has been working in collaboration with the Gujarat Society for Prevention of Cruelty to Animals (GSPCA) to rescue wildlife trapped in urban localities, particularly snakes and crocodiles in Gujarat.