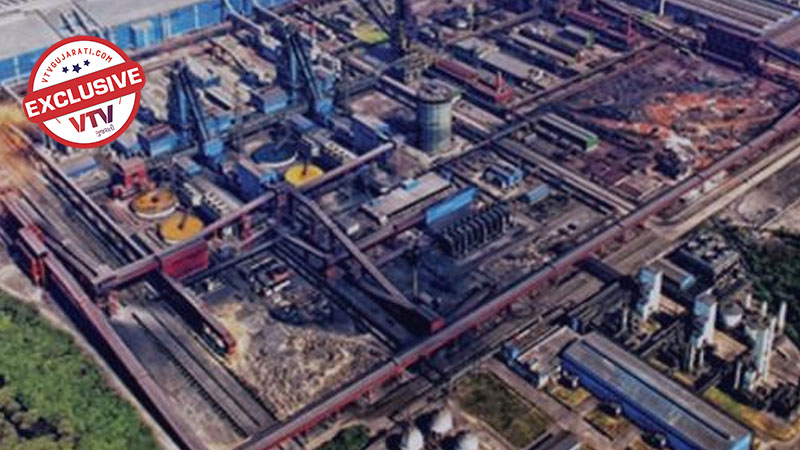 Gujarat government has decided to levy a fine of what may amount to a mere Rs 18 crore on steel major Arcelor Mittal Nippon Steel India (AMNS) for dumping waste material including slag and thereby encroaching forest land.

In a case of blatant favouritism, the Gujarat government has decided to levy a fine of what may amount to a mere Rs 18 crore on steel major Arcelor Mittal Nippon Steel India (AMNS) for dumping waste material including slag and thereby encroaching forest land, instead of a whopping Rs. 600 crore in current market value, thus causing a massive loss to the state exchequer.

It is learnt that in March 2021, the Gujarat government recommended issuing a formal approval of 38.71 hectares of forest land near AMNS Hazira steel plant for the company to expand its operations and set up a 300 megawatt power plant.

This is despite a set of notices issued by the honourable Gujarat High Court to state administration, its forest department and AMNS after it admitted a public interest litigation challenging the government and its forest department’s blatant attempt to regularise forest land which is already encroached upon by AMNS near Hazira steel plant.

“The state government’s report itself mentions that 23 hectares of forest land is being encroached upon for dumping slag by AMNS. But, thanks to the arm-twisting by AMNS, the state administration is ignoring the seriousness of the matter and terming as a mere faulty demarcation of forest land,” a source said.

“AMNS has already carried out a lot of illegal construction and dumped thousands of tonnes of slag in the 23.15 hectares forest area encroached by the company, which it now wants the government to regularise and allot officially on the basis of net present value which does not reflect the true market value of land for a commercial operation of this magnitude,” he added.

Currently the net present value per hectare of forest land anywhere is calculated at approximately at the maximum level of Rs. 9.5 lakh per hectare whereas the market value of the land in question is a minimum Rs. 16 crore per hectare.

“A simple off the hand calculation will show the extent of ‘loot’. The market value of the land is over Rs. 600 crore and not Rs. 18 crore as the levy imposed by the state government. By allowing payment of twice or five times the net present value will mean gifting a very large tract of land as a largesse to AMNS, which is in direct violation of the country’s environment laws. These laws allow for strong and high penalties and some of the corporates have already been hit because of it,” the source said.

Sources say, the state government and its forest department was also pulled by the Union Ministry of Environment and Forests’ west zone, Bhopal, MP for submitting false ground reports favouring AMNS and justifying its illegal actions of encroachment of forest land. The ministry also forced an inquiry which showed that the Gujarat government and its forest departments had not taken any action whatsoever on the directives of the Gujarat HC at all.

A few months ago, top officials of AMNS had submitted a wish list to the Gujarat Chief Minister’s office seeking a slew of concessions from the state government as “expected assistance” for the expansion of the steel plant in Hazira.

These include land at 2006 rates, land allotment within six months, condonation for violation of allotment conditions in the past, relaxation of compensatory requirements in lieu of using forest land, single-window clearances, special subsidies etc.

The other demands were: Land allotment orders to be made available within six months of application. The forest department needs to allocate land identified for the expansion project located in the vicinity of the plant on a priority basis.

AMNS also wants the state government to waive existing condition of transferring double the area under the Forest Act and allow the same area of land to be transferred for compensatory afforestation in lieu of diverted forest land.

It wants the government to appoint a single nodal officer to ensure a single point of contact and a single-window system for timely approvals from the departments of industry, finance, revenue forest & environment, energy & petroleum, ports & transport, water supply etc.

The company also sought condonation of non-compliance or violation by Essar Steel of any prescribed conditions in land allotment orders with relief to AMNS(I) as a special case for any breach of such conditions under the Forest Act, 1980. AMNS(I) has indemnity from the past criminal liabilities of Essar Steel.

AMNS is a 60:40 joint venture of Arcelor Mittal and Nippon Steel Corporation, the world’s largest and third largest steel producers, respectively. In December 2019, the JV took over Essar Steel under the Insolvency and Bankruptcy Code (IBC) by paying its creditors Rs 42,000 crore and injecting Rs. 8,000 crore in the bankrupt company.

In December 2019, the Centre amended the IBC to ring fence corporate debtors from criminal proceedings against any offence committed prior to the commencement of the insolvency resolution process.