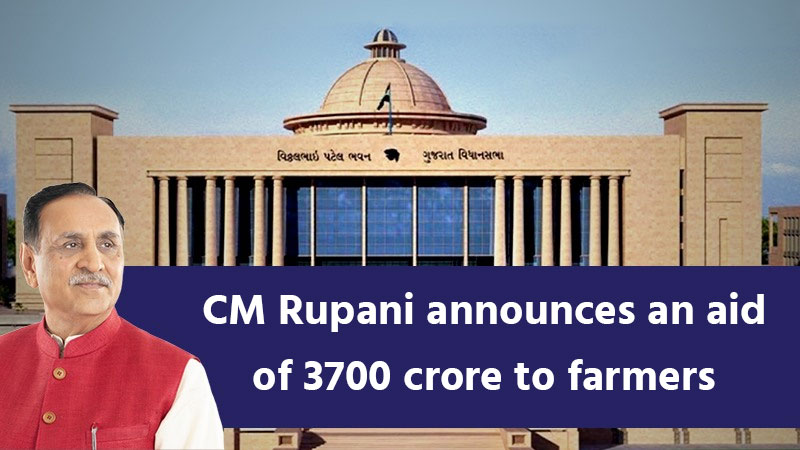 After heavy rains severely damaged crops in the state, CM Rupani has announced an aid of 3700 crore to farmers.

Heavy rains have had a devastating impact on crops this monsoon as farmers suffered a great loss with water logged farms and spoiled products. To lend a helping hand in this plight of farmers CM Rupani has announced an aid of 3700 crores. This aid is reported to help 2.7 million farmers in the state as the aid will be distributed to 123 talukas of the affected 20 districts.

Farmers can register online for this aid from 1st october onwards. It is noteworthy that both BJP and their arch political rival Congress has greeted this aid with welcoming hands. The government has also instructed the party workers and government officials to help farmers in every possible way.

Agriculture minister R C Faldu has stated that the government has determined the structure of the aid based on the survey conducted related to the damage borne by farmers due to excessive rains. The reports of the survey and the ongoing situation of agriculture has been kept in mind as the government of Gujarat has sworn to support farmers at any circumstances.

Faladu added that the government has added a sum of amount in their fund as farmers are to receive 10 thousand rupees per hectare in affected areas. Faladu has congratulated CM and DyCM on behalf of farmers. The government is committed to financially help farmers, says Faladu.

Farmers will receive their amount before Diwali

Faladu stated that the list of affected areas will expand as the survey result will appear. Farmers will receive their amount before Diwali. Not a single affected farmer will be left unaided.

Faladu alleged that farmers had their worst days in the times of Congress government. Congress put hefty burden on farmers in the name of aid. He further added that congress does not possess enough knowledge about agriculture.